Europe's Traditions On Dealing with Death

Europe's Traditions On Dealing with Death

Europe like any other part of world has its numerous death rites, meaning traditions at the moment of death, at the funeral and those that exist during period of mourning.

In Romanian province of Transylvania people believe that for each person there are his/her own tree and his/her star. The falling of a star symbolically marks the death of a person. Fir is the tree of life. It is put at the head of the grave of a deceased.

After the death group of young men brings the fir from forest. At the entrance of the village group of women meets them. They sing about the relation between the man and the tree

There are more songs which are sung as part of local death rites. One of them is "Cântecul bradului, Al cetinii sau Al sulitii" ("The Song of the Pine", "Of the pine needles" or "Of the spear"). The song is dedicated to all those who die young and single. The fir tree brought from the wood is decorated and it represents the wedding fir tree. In this song the tree is kind of complaining that instead of happy destiny of being put in some building it'll wither on the grave.

Other songs of similar nature are “At the window", "Of the way", "For the accompanying", "Of the grave" etc. These songs include advices on what the dead person should do. They tell him that he must stay in friendly relations with, for example, the wolf who knows the secret paths of the forests.

In the Romanian Maramureş county there is a village called Săpânţa. Local cemetery is rather special. It is known as The Merry Cemetery (in Romanian “Cimitirul Vesel”). It includes about 800 beautiful tombstones with naïve paintings. Each tombstone has colourful and often funny description of the life deceased used to lead. The author of these tombstones was the local artist Stan Ioan Pătraş (1908—1977). 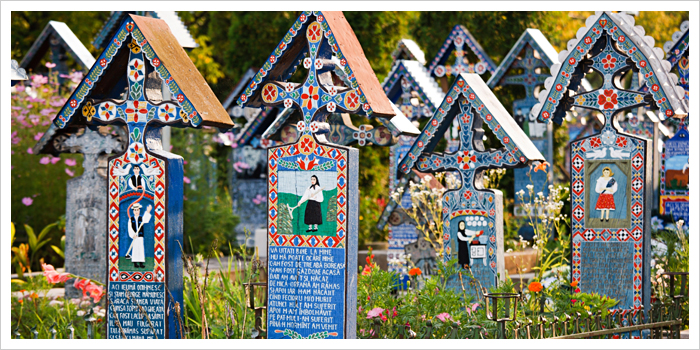 ---
In Poland a door and windows of the house where someone died should be opened to allow the soul of the deceased to leave. Mirrors are covered with some cloth. Clocks are stopped. A woman, kind of a professional, is called to wash and dress the dead. Traditionally the body of the deceased is placed on boards between two chairs or two tables.

The body is put in the coffin on the day of funeral. There is always someone with the body. The family members and neighbours keep vigil during the night. People sing, pray rosary and litanies. Traditionally the body is kept in the house for three days. The funeral is held on the third day after the death.

Ireland has some similar traditions. The window is kept opened for the soul to leave the house freely. To enable this the path towards the window should be left free. If someone blocks this path it will bring bad luck to him/her. After about two hours the window should be closed to prevent the return of the soul.

Irish people hold something what is called the “wake”. The word wake comes from the old Indo-European word "wog" or "weg" which means "to be active". Later it evolved to "growth" ("vegetable"), "to become or stay alert," and "watching or guarding". Some say that the people at a wake are waiting for the deceased to "wake up”.

The wake is traditionally held between the death and the funeral. Nowadays it is also becoming common to held it after the funeral. Wake is held in home of the deceased or in special funeral parlours. Wake can be an act of mourning and paying respect to the deceased. But more and more it is actually sort of a party that combines mourning and celebration of life the deceased had. The party also celebrates his move to the afterlife.

An ancient death rite exists in the Scottish Highlands. The deceased is buried with a wooden plate on his chest. Little bit of soil and salt is put on the plate. Soil and salt have symbolical meaning. The soil means that the body will deteriorate and become one with the earth. The salt on the other side represents the soul which lives forever.

In parts of the UK it is a tradition to put coins (traditionally pennies) on the eyelids of the deceased.

In the Netherlands it was customary to cover the windows with white sheets when someone died in the house. These sheets remained until after the funeral. Nowadays this tradition is quite rare. Nobody knows for sure about the meaning of this tradition. Some say that it is done to scare off the evil spirits.

I'm sort of skepticl of mediums I don't know I can't no judgement but I think it's safe to say I may not just understand them and how they operate s much....
Dragon It apparently was a custom brought to the New World before the Revolutionary War. Even in the 1780s, Prudence Punderson depicted it in her famous needlework piece, “The First, Second and Last Scene of Mortality,” which she finished shortly before she died. In it above her coffin, she sewed a mirror draped in a white cloth.