Most crop circles are manmade but ‘experts’ maintain that there is a distinct difference between manmade and non-manmade circles. The basis of this conclusion is a wealth of evidence and theories. Leila Sattary finds out whether there is any truth behind the science of crop circles

Crop circles, usually found in Southern England, are beautiful and often highly complex designs made by the flattening of the crops in circular patterns. Last year, in Wiltshire alone, over 70 crop circles appeared during the summer months. 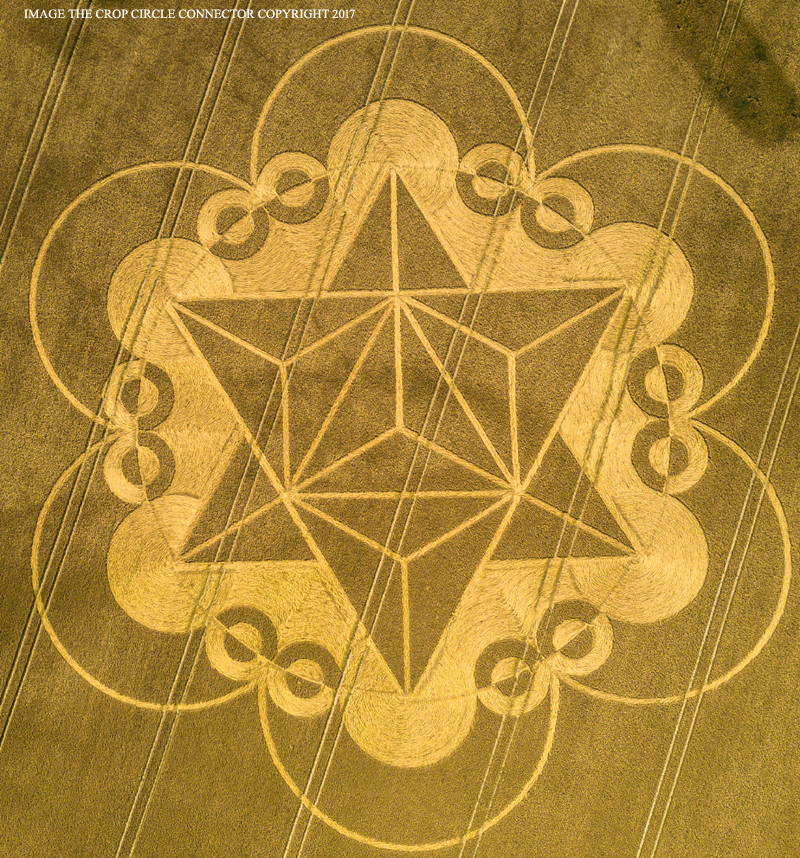 Image Credit : The Crop Circle Connector Source
^ A crop circle which appeared in  Cley Hill, Nr Warminster, Wiltshire. UK. Reported 18th July.
The crop circle appeared on a farm which had no access to public.

There is some history of crop circles prior to 1960 but they have only become common and mysterious during the last 50 years. As the patterns grew increasingly sophisticated and frequent, theories ranged from the circles being landing spots or even encrypted messages from UFOs, or natural phenomenon created by magnetic fields or whirlwinds.

The mystery unravelled in 1991 when Doug Bower and Dave Chorley, landscape artists from Southampton, claimed to be responsible for making all of the crop circles in England. The increased complexity of the crop circles over the years was intended to quash theories that they could be caused by natural phenomenon and reinforce their intended UFO hoax. The hoaxers finally gave in by an announcement to the press after Bower’s wife had accused him of adultery following the many nights he went missing and the high mileage on his car.

In recent years, manmade crop circles have continued to be created for fun or advertising purposes. Those who make crop circles appear to be attracted to elegant interpretations of mathematical formulae. Mathematic themed crop circles include Euler’s formula, the number pi (up to an accuracy of 10 digits) and a number of other fractal icons like Koch curves and Mandelbrot sets. Taking advantage of their popularity, brands including Pringles crisps, Orange mobile, Firefox and even the Richard and Judy daytime show have employed ‘circle-makers’ to advertise their logos in crops.

However, many people still believe that some crop circles are not manmade. The campaign is led by cerealogists (those who study crop circles) at the BLT Research group in the US. They claim to have found that in crop circles, the nodes of the crops are enlarged or even exploded and at a rate that is more concentrated in the centre than the outskirts of the circle. This piece evidence is the basis of many theories of electromagnetic energy and ion plasma vortexes. The group also study unnatural bending of stalks, seed malformation and germination effects and clay crystallisation and have gathered a wealth of data from crop circles around the world.


At first glance, their work seems interesting or could even convince a sceptical mind that there is more to the story than creative hoaxers. However, three key points about the work of the BLT group worry me. The first is that while there is correlation between effects, this does not tell them anything about the causation – this is a fundamental mistake in their analysis. The second problem is the potential conflict of interest – the research group and the people they associate with make a lot of money out of the belief that crop circles are mysterious. American tour groups have been known to pay $2,000 to view crop circles, and theorists continue to make money from books and articles they publish as ‘experts in the field’ (pun intended). The third aspect that makes me wary is that if there really was any scientific merit in BLT’s work then surely scientists would be interested and active. Curiosity driven scientists are not known for avoiding mysterious problems. The fact that there has been almost zero peer reviewed research into crop circles makes me think that scientists are simply not interested in crop circles – they see them as so obviously a hoax.