signs from my brother?

signs from my brother?

on the 9th of august i had a dream that i was walking in a field, i remember the grass was very vividly green and in front of me appeared a very wide pumpkin  tree with small bright orange pumpkins hanging from branches.

I stopped walking to observe the tree and i remember thinking that pumpkins grew in patches, and i googled it when i woke up to find that actually there are pumpkin trees, i hadnt known this.

The leaves on this tree were as green as the grass and as i watched it one pumpkin fell off the tree and landed upright on the grass just in front of me.

when i woke up i thought about how strange this dream was and wondered what it meant.

on the 13th of august i got a call from my dad to say that my brother had died that night, now i think that that dream may have been like some sort of warning to say that a member of the family was going to die, i wish i had counted the pumpkins because there are 6 siblings on my dads side and 9 on his mums side.


I had already booked and paid for a holiday to brean on the 16th and as i couldnt get my money back i decided to still go.

the first two morningsi would wake up and open the curtains to our chalet and there would be 3 or 4 ducks and some seagulls just stood outside of my door looking in, they werent outside anyone elses door, one of these mornings i went to the shop and on the way back i could still see them sat outside of my door just looking in. 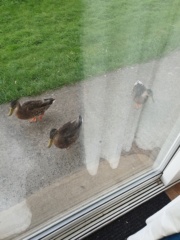 the first night of my holiday i couldnt sleep and so i asked my brother to send me a sign that he was ok, shortly after i went for a fag  in the early hours of the morning .
i had tidied up and swept before going to bed but on my way out of my bedroom door i saw a white feather on the floor, so i picked it up and kept it. 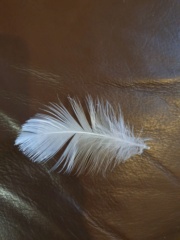 then outside whilst having my fag i  clearly seen T.T in the shape of clouds that quickly floated away, i dont know what this means but i feel it could have been some sort of sign.

that same night  i vaguely remember a dream of seeing the outline of a egyptian cat in the dark. I was a passenger in a car and of a bird that looked like a Phoenix flying through the sky. it wasnt on fire though just a dark shadow like figure. it was at night.


every now and again for the first week or two i kept feeling like somebody was stood near me watching me, i feel like it was him.


my light in my kitchen can be a little unstable so could be a coincedence but lately it only seems to flicker and buzz just before i am about to walk into the kitchen sometimes.

, on the way back , the first thing i noticed in the waiting room was this little white feather on the floor in my path. again i am going to keep it. 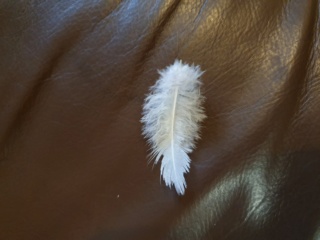 my dog poppy keeps lookin into the air and whining and wagging her tail like somebody is there, she never used to do this, mainly by the front door. 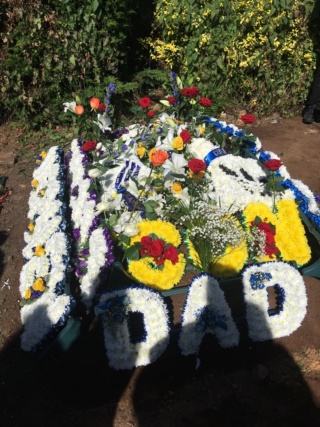 thank you button, i just wish i could have a sign from him like actually seeing him here or in a dream so that i can talk to him, my dad could really do with this too, is there a way we can ask him to come to us? im ready for this.

both me and my dad also keep having unwanted thoughts about his body rotting away to a skeleton and all the earth crashing in through the coffin on top of him, we both know that his spirit isnt in his body anymore than he is free, but its really disturbing to us.

my dad also wants to know where he is now.

its hard to talk about spiritual stuff with my dad because other than believing that death isnt the end , that our spirits live on he doesnt believe in angels and things like that, hes a rastafarian. x
Button

Button wrote:Its hard for some one that doesn't believe but in my experience I no he is with the angels sometimes my daughter that passed away a few years ago visits me in dreams and I get feathers and lots of butterflies because my daughter had a big tattoo of a butterfly xx

aww its nice when they send signs x
Button