Stargazers are in for a treat over the next four weeks, with October’s full "Hunter’s Moon" and the Leonid meteor shower appearing in the night sky.

The full moon will appear on October 24. It is known as the Hunter’s moon because this would have been the time people went out hunting by moonlight in order to stockpile food for winter.


At the same time as the full moon, Uranus will appear in the night sky. While the glare from the moon will block it to an extent, it might be possible to see the seventh planet from the Sun at the same time.

After this, the new moon will appear on November 7 and will be reach its first quarter on November 15—good timing for the Leonid meteor shower, which will peak two days later. When a meteor shower coincides with a full moon, it can be difficult to see—the light from the moon makes spotting shooting stars difficult.

The Leonids meteor shower happens when Earth crosses the orbital path of Comet Tempel-Tuttle. The comet leaves a path of tiny debris. When these debris enter Earth’s atmosphere at speeds of around 43 miles per second, they vaporize, causing bright streaks across the sky.

The Leonids has the potential to produce meteor storms, where hundreds if not thousands of meteors are produced every hour. In 1833, the storm was spectacular, producing 100,000 meteors per hour.  This year’s event is not expected to be quite so prolific.

[You must be registered and logged in to see this image.]
2001 Leonid fireball recorded in Hawaii
Credit: NASA 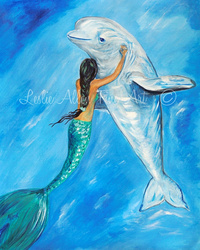 [You must be registered and logged in to see this image.]

Great Pic Mermaid, you are quite a photographer

[You must be registered and logged in to see this image.]

Glad you both liked it ... thank you.